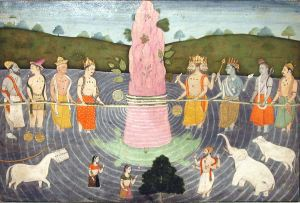 EDWIN BINNEY 3RD GALLERYâSHIVA INSTALLATION
In Hindu myths of creation, both Gods (Devas) and Demons (Asuras) were the firstborn children of the Lord of Generation. Their opposition was simply the dualism in the nature of thingsâday and night, good and evil, beauty and ugliness. In order to obtain immortality, which was not inherent in their nature, they needed to find a substance, soma, also known as amrita (immortality) in order to escape death. Normally at odds, often in conflicts that brought death to both and required special interventions to bring them back to life, they decided to co-operate for this one time only in an alchemy that would yield the ultimate prize, immortality. Only by pooling their strengths could the gods and the demons churn the great Ocean of Milk from which all substance issued, in hopes that soma would emerge.
They divided into two teams, the Devas on one side of Mount Mandara and the Asuras on the other. Mount Mandara plunged into the depths of the Ocean like a pillar and rested on the unmoving giant turtle Akupara. The Devas took the head of the serpent Vasuki, and the Asuras his tail. They wrapped the serpent around Mount Mandara, and pulled back and forth to create the friction that would stimulate the emergence of substance. From this difficult toil emerged the âJewelsâ(Ratna) of the worldâthe Sun, the Moon (Shiva plucked a crescent from the moon and placed it in his hair); the Apsaras, lovely women of the waters; the White Horse; Krishna (for only a moment before resuming his place in Vishnuâs breast;) the Nymph; the Elephant; the Physician; and the Cow of Desires. Only after exhausting effort did the liquid of immortality finally appear. The allies immediately reverted to their sectarian differences and vied to obtain it. Vishnu created a diversion, turning himself into a beautiful woman. The Demons were distracted and the Gods swallowed the soma, making themselves immortal.
In each of these pictorial renderings of the momentous story from different regions and times, the players can be found. The Gods are on the rightâBrahma the Creator with his multiple heads, Vishnu with his blue body, Shiva with his ash-grey body and matted hair; and in two instances also Indra the King of the Gods with his crown. In the Mysore picture, Krishna also appears on the side of the Gods. The Demons vary from foreign looking men to fanciful beasts.

August 2021
Pearls from the Ocean of Contentment
In Hindu creation myths, gods and demons were the firstborn children of the Lord of Generation. Seeking to escape death, they banded together toâ¯findâ¯the nectar of immortality (soma) lost in the primordial oceans, churning the Ocean of Milk that bore all life in hopes thatâ¯somaâ¯would emerge.â¯Here Mount Mandara appears submerged in the ocean atop the giant turtleâ¯Akupara,â¯whileâ¯the gods at right and demons at left push and pull the serpent Vasuki to stir the watersâ depths. Their efforts would yield the âjewelsâ of the world, including the sun, moon, and, finally, the liquid of immortality.
Last Updated: 2/2/2022

Your current search criteria is: Object is "The Churning of the Ocean of Milk".