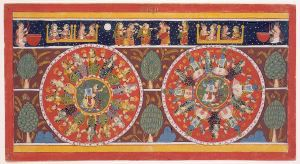 The circular dance began with the gopis locking arms and moving joyously around their lord. In order that each gopi might feel that he belonged to her alone, Krishna used his yogic powers to multiply himself so that each gopi danced by his side.

So great was the joy of the gopis in this frenzied dance that their wreaths and ornaments were loosened and falling, and they were too beside themselves to keep hair or clothing in place.

The two paintings of this subject shown here are from the same Central Indian court and were painted about twenty-five years apart. Both paintings show two phases of the rasa dance. On the left of each picture the gopis dance raucously around Krishna and Radha, the maiden who has stolen his affections. On the right, Krishna has magically multiplied himself to dance with each girl.

As Krishna began his wild and ecstatic dance, the celestials, seen in the upper registers of these pictures, pulled up their chariots to watch. The celestial damsels, while witnessing Krishnaâs love sports, fainted, and even the mood-god with his retinue of stars was too amazed to continue on his nightly journey and halted. In their pleasure, the gods sprinkled down flowers upon the dancers.

October 2005
Domains of Wonder
Under the dazzling night sky, Krishna and the cowherd girls (gopis) form a splendid moving circle on the bank of the Yamuna River, and began a festive dance. Krishna miraculously multiplied himself as many times as there were gopis, so no one was deprived of his company. Gods and goddesses participated in the lively revelry by singing to the glory of the Lord and sounding the kettle drums up in the sky.
Even long after the establishment of the influential painting atelier of the Mughal empire, individual workshops, such as some in Malwa, clung to indigenous Indian styles.
Last Updated: 9/5/2017

Your current search criteria is: Object is "The Eternal Dance: Rasamandala".