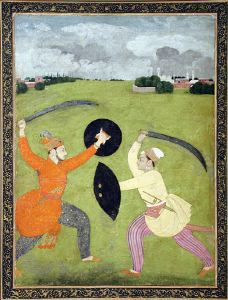 October 2005
Domains of Wonder
Paintings from Ragamalas are intended to evoke the same mood as an associated poem and piece of music. In this example, distinctive to the Pahari Ragamala tradition, the mood is bellicose. Delicately colored, the work is remarkably well drawn. One observes real animation in the figures of the two duelers, who come full tilt at each other, swords threateningly poised and bucklers advanced in defense. The white marble and pink sandstone buildings in the distance, the dress of the figures, and the forms of their weapons indicate the artist's familiarity with imperial Mughal paintings.
Last Updated: 9/5/2017

Inscription, Top center: (from the collection of?) the maharaja (Nawab?) of Lahalu?), in the state of Kangra, Punjab

Your current search criteria is: [Object]CurrentLocation is "@galleries@" and [Object]Country is "India" and [Object]Century is "18th century".