To Catch a Glimpse of Him, Even from a Distance 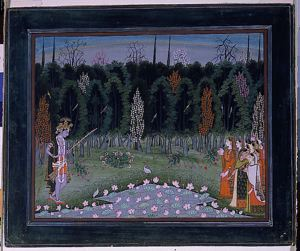 To Catch a Glimpse of Him, Even from a Distance

The young playmates mature, and their encounters take on new dimensions. This picture is inscribed on the back with lines of verse written by the 17th century Hindi poet of love Mati Rama from his Satasai (Seven Centuries of Verse). They are the words of a young woman, spoken as a garlanded Krishna emerges into view from a thicket:

The painter dotes on the charged mood of this âdarshanâ or union through the eyes. Trees and creepers are laden with âhoney-sheddingâ flowers, and even the open lotus buds bend to Krishnaâs regal light. The gopis clusterâbashful and yet brazen in their direct gaze. Krishnaâs beauty is dazzling:

He is blue like a new cloud; his eyes are like lotuses; his face is as graceful as the autumnal full Moon; his lips are like bimbas; the row of his teeth shames the peals. A gentle smile plays on his lips.
Brahma-vivarta-purana, Brahma Khanda 21, 32

He moves toward them with his festive stick piercing an untold number of blossoms aimed gently but firmly toward them.
The distance between them is rich, heavy and intoxicating, and renders the subject of the picture more a mood and idea than a narrative.

October 2005
Domains of Wonder
A lotus pond separates the handsome, youthful Krishna, an incarnation of the god Vishnu, from the timid maidens of his village, who are all in love with the young cowherd.
Kangra artists excelled in creating lyrical, dreamy landscapes. The flowering trees with birds perched upon its branches, and the lush green field peppered with blossoms enhance the amorous atmosphere of this quiet encounter.
Last Updated: 9/5/2017

Your current search criteria is: Object is "To Catch a Glimpse of Him, Even from a Distance".