Krishna steals clothes of the milkmaids 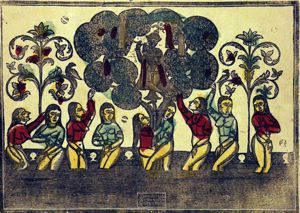 Krishna steals clothes of the milkmaids

February 2008
Nandalal Bose Exhibition
Wood and metal engravers of Battala, the section of Calcutta that was the center of inexpensive printing and publishing, became a serious competitor for Kalighat painters. By the end of the 19th century, the printing industry absorbed many Kalighat painters and traditional village artists. The prints were mass produced on inexpensive paper, with consistently stylized imagery, heavy contour lines, quickly applied daubs of color, and the use of some hatching to convey a sense of volume or shadow. Prints produced in the presses of Battala continued to depict the religious themes and subjects popularized by Kalighat painting. This example depicts an episode from the youth of the Hindu divinity Krishna, when he stole the clothes of the cowherd girls in his village while they were bathing, in order to force themâlike his devoteesâto shed all inhibitions and come to him.
Last Updated: 9/5/2017

Your current search criteria is: Object is "Krishna steals clothes of the milkmaids".