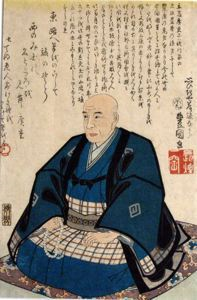 This portrait of the artist Hiroshige shows him as he looked just before his death, with the robes and shaven head of a Buddhist priest. At the age of sixty, two years before his death of an undetermined long illness, he took monkâs vows. Memorial prints like this, issued after the passing of a notable person in the arts, were common for Kabuki actors, but not so for print artists. The designer of this print was a leading artist of the time, who signed it: âToyokuni drew this with tears flowing in remembrance.â The lengthy inscription is a biographical eulogy, and in one of the seals, there is a Buddhist saying: âlife is but a mere puff of smoke.â The final inscription is the death poem composed by Hiroshige himself: Leaving my brush in the East, I follow the skies of travel To see the famous places of the Western Paradise.
Last Updated: 10/29/2010