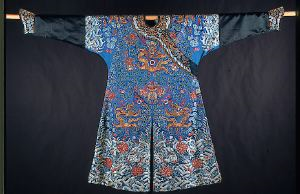 August 2008
Asian Court Rotation
Ji-fu is a semi-formal robe for court functions worn by both men and women in a wide spectrum of Qing society. It was not worn for ritual or formal, ceremonial occasions. The four-clawed dragon, or mang, indicates that the owner of this robe was a lower ranking prince or official. The five-clawed dragon, long, was typically reserved for the emperor, the imperial family, and, with the emperorâs permission, select high-ranking officials. The peonyâking of flowersâis a motif seen throughout the lavish ornamentation on this robe. It is paired with the eight auspicious symbols of Buddhism as understood in Qing-dynasty China: endless knot (infinite wisdom and compassion of Buddha) wheel of law (Buddhist doctrine) conch (far-reaching sound of Buddhaâs teachings) lotus (purity) standard of victory (victory of the Buddhaâs teachings) vase (the elixir of life) twin fish (freedom from constraints) princely canopy (protection under spiritual power) Two of the eight symbols, the twin fish and the princely canopy are combined and featured below the largest, central dragon. Blossoming peonies and the Eight Treasures (wish-granting pearl, double lozenges, stone chime, rhinoceros horns, double coins, ingot, coral, and wish-granting scepter) emerge from the turbulent wave design known as âhurricane wave border,â which is characteristic of mid-18th century imperial textiles.
Last Updated: 3/15/2012

Your current search criteria is: Object is "Semi-official Robe (with dragon design)".