Nude Seated on a Stool 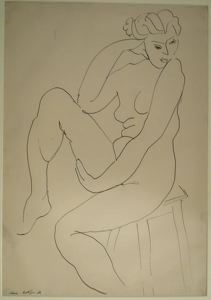 Nude Seated on a Stool

A Harmony of Line: Selections from the School of Paris
AP 2011
By 1930, when he moved from Paris to the South of France, Matisseâs reputation was firmly establishedâalongside Picassoâas one the founding figures of Modern art. Though he continued to paint interiors and still lifes, Matisseâs practice in the 1930s focused increasingly on the graphic arts, with a particular preference for the female nude. The spare calligraphic quality of his prints and drawings also informed Matisseâs painted style in this period, with an absolute emphasis on the silhouette. In contrast to the unbroken, seemingly effortless contours of Picassoâs line drawings, Matisseâs less steady hand conveys the vibrancy of the figure studied from life.
Last Updated: 2/8/2013

Your current search criteria is: Object is "Nude Seated on a Stool".