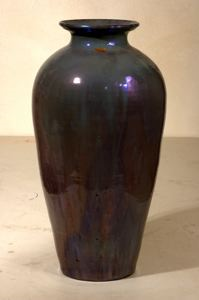 February 2006
American Ceramics, 1884â1972
A Michigan native, Mary Chase Perry Stratton studied at the Art School of Cincinnati between 1887 and 1889. In 1893, she returned to Detroit, where she opened a studio devoted to china painting. She both practiced and taught the craft, which was immensely popular in the late nineteenth century. She also became a spokesperson for the Revelation Kiln, a type of portable oven that was being marketed to artists working in ceramics and china painting. In 1903, Stratton founded the Pewabic Pottery in Detroit with her business partner, Horace J. Caulkins (1850-1923). The firm's products included bowls, vases, and lamp bases. Later, architectural tiles were added to Pewabic's wares. Never proficient at the potter's wheel, Stratton had all her forms thrown for her, thereby allowing her to concentrate on glaze chemistry. In the spring of 1909, after years of testing and experimentation, she succeeded in developing an iridescent glaze that was said to almost glow. The vessels in this case display a variety of these glazes in different colors that were achieved through the use of metal oxides and multiple firings. Mrs. Stratton donated these six works to the Museum in 1941. In a letter to founding Director Reginald Poland, she wrote, "The pieces sent to you have been made at different periods during the past twenty-five years and put away as 'top notchers,' to be installed someday in distinguished places."
Last Updated: 4/9/2020