Woman with a Rose 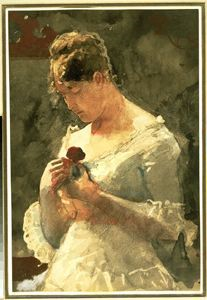 Woman with a Rose

October 18, 2014
Anita Feldman, Deputy Director Collections & Exhibitions
Winslow Homer
American â¢ 1836â1910
Woman with a Rose
Watercolor â¢ 1879
As a self-taught artist, Homerâs early experience was as an illustrator, an occupation he pursued much of his career. After the Civil War, where he served on the front lines as an artist- correspondent, he took up oil painting, broadening his expe- rience by spending nearly a year in France where he was influenced by the Barbizon School. Homer's unique talent with watercolor was increasingly recognized internationally. Many of his watercolors through the 1870s featured land and seascapes and moments of quiet contemplation such as Woman with a Rose. Homerâs success allowed him to settle permanently in Proutâs Neck, Maine where he painted a powerful series of marine oils and watercolors that cemented his reputation as one of the greatest American painters of the nineteenth century.
Bequest of Mrs. Eda Hurd Lord
1938.183
Last Updated: 10/20/2014

Your current search criteria is: Object is "Woman with a Rose".