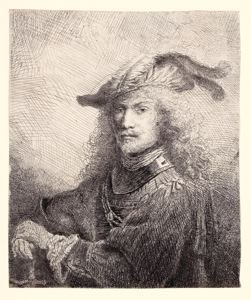 Rembrandt's penchant for depicting himself and others in exotic paraphernalia is well known, but it was a taste shared by many contemporary Dutch artists. This image is traditionally identified as a "Portrait of an Officer" because of his feathered cap, gloved hands, and his gorget, the armored collar worn by army officers. Such costumes were common studio props, however, and it has also been suggested that this is an exotic self- protrait of Bol. His mustache and prominent nose do resemble those of Bol's known self-portraits, and the sitter's pose is familiar from Rembrandt's Self-Portrait leaning on a Stone Sill of 1639.

Although this might be a self-portrait, the etching may have been sold primarily as a kind of character study, rather than as a record of Bol's appearance.
Last Updated: 3/23/2010

Your current search criteria is: Related to "Ferdinand Bol" and [Object]Century is "17th century".