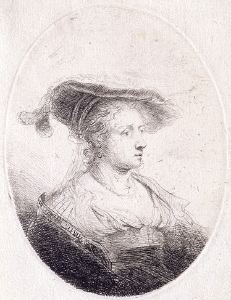 The large beret worn by the woman in this print was not fashionable by the time that Bol captured her image in the 1640s, and it would have seemed to his contemporaries an archaic costume from the previous century. Like many elements in the character studies by Dutch artists of the time, it was simply another studio prop.

The model for the Young Lady is sometimes identified as Saskia, Rembrandt's first wife, whom Bol would have known from his years in Rembrant's studio. The etching is dated 1644, two years after Saskia's premature death, but that fact would hardly rule out the identification of the sitter as Saskia, for Bol on numerous occasions based his etchings on paintings, drawings, and prints that he and/or Rembrandt had created a number of years earlier.
Last Updated: 3/23/2010

Your current search criteria is: Related to "Ferdinand Bol" and [Object]Century is "17th century".