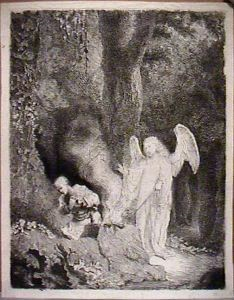 In the Old Testament story of Gideon, an angel was sent by God to convince Gideon that he must save the Israelites by fighting their enemies. At first, Gideon did not recognize the messenger as an angel but followed his directions and prepared a sacrifice, which was miraculously consumed by fire, and the angel then vanished. Bol sought to capture that climactic moment as Gideon recognized the divine messanger.

As in many of Bol's earliest prints, he borrowed figures and ideas from the work of his master. The figure of Gideon is drawn directly from Rembrandt's Angel leaving Tobias, and the angel derives from the Angel appearing to the Shepherds. The sketchy quality of Bol's angel, delineated with minimum detail, is likewise borrowed from Rembrandt, a clever adaptation because the technique was particularly apt for an angel in the act of disappearing.
Last Updated: 3/23/2010

Your current search criteria is: Related to "Ferdinand Bol" and [Object]Obj. Type is "Etching".