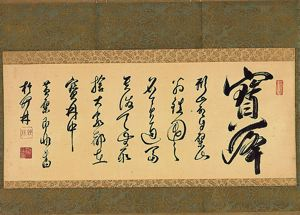 This passage of calligraphy was written by Sokuhi Nyoitsu, a Chinese-born monk who immigrated to Japan during a period of political and social upheaval in China surrounding the fall of the Ming dynasty in the middle of the 17th century. His story describes the continuing influence of Chinese Chan (Japanese=Zen) on Japanese Zen Buddhism.

Sokuhi arrived in the port of Nagasaki, which, although the Tokugawa government had closed Japan to foreigners, was open for a few Chinese traders and for a tiny enclave of Dutch merchants. The law was also relaxed for Chinese exiles who asked to become Japanese nationals or who expressed a desire to remain in Japan. The Chinese in Nagasaki built a temple to the Goddess Matsu, protector of sea voyagers, and the temple was presided over by Chinese monks. Monks from the monastery founded on Mount Huang-po in Fujian Province became traditional heads of this temple and received other monks seeking exile. Huang-po is pronounced Obaku in Japanese, and the sect was known as the Obaku sect.

Sokuhi was from the Huang-po monastery. He was invited to come to Nagasaki and joined fellow Obaku monks there and then on assignments to other temples. They succeeded in founding a monastery at Mampukuji outside of Kyoto. Sokuhi and two fellow Obaku monks became known for their calligraphy as âthe Three-brushes of Obaku.â

The passage written by Sokuhi in a characteristic bold style reads as follows:

Formed mountain (of Treasure Peak) begins with the old man of (O)bakusan. It is famous for preserving the peace of the state from ancient times to the present. Wealth and honor pour from heaven without human choice; the great masters all abide in the treasure forest.