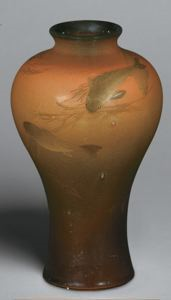 February 2006
American Ceramics, 1884â1972
This vase has a yellow-tinted translucent glaze known as standard glaze. Introduced by Rookwood in 1883, it became one of the firm's most celebrated glaze lines. The shape is borrowed from a type of high-shouldered Chinese vase known as meiping that dates back to the Song dynasty (960-1279). The motif of the swimming carp, rendered as if seen from above, derives from a Japanese or Chinese source.
A wheel ground âXâ on the bottom indicates that this work was held back from the sales room; in this case, the vase was considered a second, as indicated by the three marks in the glaze beneath the carp. The pottery management must have considered the design successful, however, as it was featured in an article titled âRookwood Pottery,â by John Valentine in the September 1898 issue of House Beautiful.
Last Updated: 00/00/00

Your current search criteria is: Related to "Harriet Elizabeth Wilcox".