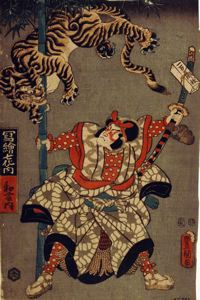 Watonai, also known as Coxinga, was a seventeenth-century pirate, son of a Chinese smuggler and a Japanese samurai lady. He is famous for the part he played in his resistance against the Manchu invaders of China in 1644. During one episode, he carried his mother on his shoulders to a bamboo grove, where he fought and defeated a tiger. This print is part of a series depicting scenes from the compilation Tokiwa no iro ogi utsushi-e, performed at the Nakamura Theater in the tenth month of 1857. In this performance all major roles were played by the actor Onoe Waichi II.
Last Updated: 1/30/2015