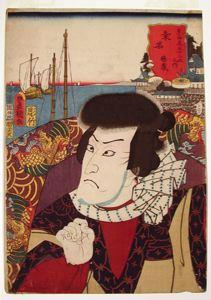 The station of Kuwana is referenced by a portrait of a Kabuki actor who played the role of a brave and intelligent seaman, whose name Kuwanaya Tokuzo sounds similar to the name of the station. The same actor reprised this role in three different plays based on the old legend about how Kuwanaya Tokuzo used his wits to protect his ship from being capsized by a sea monster, an interlude depicted by Kuniyoshi in the print below.
Last Updated: 2/17/2011