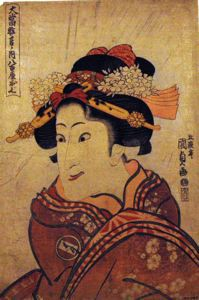 The actor Iwai Hanshiro V as the Greengrocer's daughter, Oshichi

One of the most memorable characters in Kabuki, Oshichi is the heroine in a drama of forbidden love. She and her family took refuge in a Buddhist temple during a fire, and while there she and the temple attendant fell in love. Desperate to be reunited with her lover, Oshichi burned down her own house so that she could again return to live at the temple. She eventually would be burned at the stake for committing the capital offense of arson. By focusing attention on the exaggerated expression in a close-up image of the face, the artist Kunisada memorably portrays the actor who was famous for his dramatic interpretation of the lovesick madness of Oshichi.
Last Updated: 1/29/2020