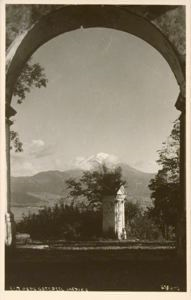 In his birth country of France, Briquet worked as a commercial photographer before arriving in Mexico, where he received several government commissions. In fact, it was the dictator Porfirio Diaz (1830-1915) who commissioned the Vistas Mexicanas series. This particular photograph, taken near Amecameca, is representative of this series commissioned by a leader whose policies contributed to the start of the Mexican Revolution. Diaz's interest in French culture likely led to his support of Briquet's photography. Around 1911, near the beginning of the Mexican Revolution, Briquet stopped working in Mexico.
Last Updated: 11/9/2010

Your current search criteria is: Related to "Hugo Brehme" and [Object]Period/Reign is ".