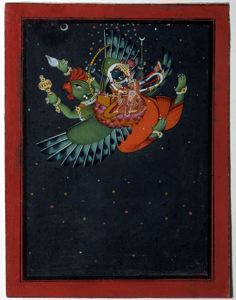 On the wings of Garuda: Krishna and Satyabhama fly through the night sky

The gods ride through the glittering night sky on Garuda, the mythical half-man half-bird. The lower half of the painting, empty but for the brilliant sky, shows us how far they have come from earth.

Stars are interspersed with flowers: though we cannot see them, the gods hover above the edge of the painting, raining roses, and jasmines onto the airborne pair so that every breath they take is perfumed. Intense observation and deep fantasy coalesce in this image.

A problem of identifyng just who is depicted here persists with this piece. It is either the god Vishnu or his incarnation as the god Krishna. If Vishnu, the companion is Lakshmi. If Krishna, the companion is Satyabhama, one of Krishnaâs eight official wives. The god Vishnu usually has four arms, but as âLakshmi-Narayana,â a meditative form of Vishnu, he has two arms and rides on Garuda, as is shown here. Vishnu, however, is not usually armed with a bow, while Krishna is. We will keep you posted on results of the investigation.
Last Updated: 9/5/2017

Your current search criteria is: Portfolio is " Painting" and [Object]Country is "India" and [Object]Period/Reign is "Hara Chauhan Dynasty".