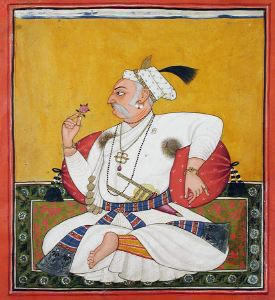 Sangram Pal was born in 1628 and succeeded his father at the age of seven. He was summoned to Shah Jahan's court when he was 12 and became a friend of Dara Shikoh (see Celebrations of Shah Jahan's 46th Birthday). Apowerful ruler, he won every military campaign he waged. His 22 wives produced only one child, a daughter, who married the Raja of Chamba. Sangram Pal died in 1673. He is shown here wearing the same pendant worn by his nephew Kirpal Pal, and a Vaishnavite tilak on his forehead. Sangram Pal is the patron for whom the Tantric Devi paintings were made.
Last Updated: 9/5/2017