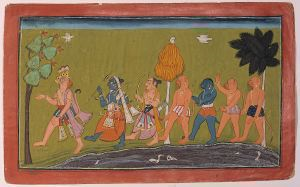 Sugriva leads Rama and Lakshmana to Kishkindha, the capital of Bali

Rama and Lakshmana continued south, asking everywhere for signs of the abductorâs path. Finally they came to the edge of the Dandaka Forest and Lake Pampa. There they learned that two monkeys, living in exile on Rishyamuka Hill, had seen Ravana carrying Sita southward through the sky. The two monkeys were Sugriva and his loyal friend, the White Monkey, Hanuman.

Rama was taken to the monkeys and listened to their story â one of unjust banishment, contested kingship, and separation from oneâs wife. Sugriva and his brother Vali, King of the Monkeys and the Bears, had gone to defeat a demon that had been ravaging the Kingdom. The demon managed to trap Vali in a cave. For a year, Sugriva cried out for his brother with no reply. After seeing blood coming from the cave, Sugriva presumed Vali dead and sealed the cave with a great stone. Sugriva became King of the Monkeys and the Bears. But Vali was not dead. He managed to escape from the sealed cave, and accused his brother of treason. Sugriva rejoiced at seeing his brother and willingly relinquished the crown. But Vali would not accept his brotherâs innocence and exiled him from the Kingdom, keeping Sugrivaâs wife as his own.

Rama heard Sugrivaâs story with great sympathy. Rama offered to kill Vali and place Sugriva on the throne, and this he did. It was an unusual deed, for this was no fight of Ramaâs, and âyet the place of a single deed in the rope of time cannot be seen with the human eye.â Ramaâs action won him the loyal friendship of Sugriva, Hanuman, the monkeys, and the bears. These friendships were to prove fateful in the demise of Ravana.

After killing the demon in the guise of the golden deer, Rama returned to the hermitage, but Sita was gone without a trace. Distraught, he entreated the animals, the river, the wind, and the flowers to tell him where Sita has gone. They all leaned or turned towards the South. Rama and Lakshmana took this as a sign and traveled south in search of Sita, encountering demons along the way. One demon was released from a curse when Rama cut off his arms. He took on a heavenly form and advised Rama to find an ally in a deposed monkey king, named Sugriva, whose brother Vali has taken both his throne and his wife.

Rama and Lakshmana found Sugriva in exile and agreed to help him regain the throne. Here, Sugriva leads Rama and Lakshmana to go meet Vali and challenge him to a fight. Sugriva and his tribe were vanaras, simian forest dwellers resembling monkeys but with superhuman strength.


8/25/2017 - Diana Chou
When Rama and Lakshmana find that Sita has been abducted, they encounter two exiled monkeys named Sugriva and Hanuman who witnessed Ravana carry Sita away.Rama also learns about Sugrivaâs unjust banishment from his home in Kishkindha and earns Sugrivaâs loyal friendship by traveling there to avenge this wrongdoing. Sugriva, along with the monkey and bear armies, pledges his assistance to help Rama defeat Ravana.