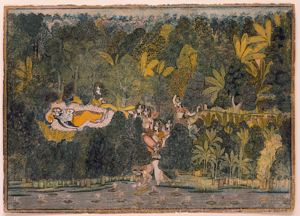 The Bower of Quiet Passion

Myths, Monsters and Maharajas (Ellen Smart, 1992)
Maharaja Sawant Singh (r. 1699-1764) was a devotee of Vishnu, an accomplished poet, and a patron of the arts of music and painting. This painting illustrates one of his devotional poems about the love of Radha and Krishna dispelling the icy cold of the night.
At first glance the scene is a lovers' paradise, with a flower petal bed and beautiful music made by the gopis. The lovers can also be seen as Sawant Singh and his best beloved Bani Thani in Brindaban Forest. But ultimately, if interpreted in the light of Pushti Marg, the Pleasure Path cult of Kishangarh, it represents spiritual union with God, ecstasy and divine love being the path of the devoted.

Power & Desire, 04/00
In the heart of impossible lushness, Radha and Krishna lie on a bed made of lotus petals. In this secret place, they are attended by women-devotees who watch, sing and pluck more lotuses for them. As the devotees stand witness to their union, the painting is not a narrative of their love, but an icon of the fact of their love.
The love of Radha and Krishna is a metaphor for the soulâs longing for god. Empathetic participation in their love is believed to lead to union of the soul with god.
This painting is associated with Sawant Singh, a great Rajput patron and Krishna devotee. So absorbed was he in following loveâs path to Krishna, that he abdicated his throne, and retired with his beloved to Krishnaâs own boyhood town, to live out in his life the divine love-play of his lord.

October 2005
Domains of Wonder
One Rajput ruler composed devotional poems about the love affair of Krishna and the cowherd girl, Radha. He and his favorite courtesan would reenact the story of Krishna and Radha, even recreating the sylvan setting of their nocturnal rendezvous. It is ambiguous in this painting whether Krishna and Radha lie in the bower, or his devotees. Perhaps the artist wished to convey that, ultimately, they are the same.
Last Updated: 7/9/2021

Inscription, On reverse: In this manner, in the quiet slumber of love, did the night pass (for the lovers) . . .