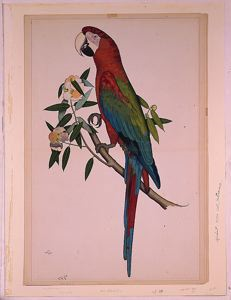 The Ara choloptera, or green winged macaw, is native to the New World tropics, but must have been a resident of Mary Impey's private zoo in Calcutta at the end of the eighteenth century. Lady Impey was one of a number of amateur natural historians in India, intensely interested in identifying and recording species unknown in Europe. In most, but not all, of the illustrations her artists pair the animal or bird with an appropriate plant, thus recording Indian flora as well as fauna.
Shaikh Zain al-Din was one of three artists employed by Lady Impey from 1777 to 1782 to make life-sized paintings of Indian as well as rare and exotic species of birds and animals in her menagerie. The artists were from Patna which was part of the provincial Mughal court of Murshidabad and 300 miles up the Ganga from Calcutta. All would have been trained in the tradition of Mughal court painting.
Lady Impey returned to England with the more than 400 natural history illustrations in 1783, when her husband's term as Chief Justice of the Supreme Court at Fort William expired. The collection remained in tact throughout most of the 19th century and is now scattered in public and private collections.

October 2005
Domains of Wonder
Training in Mughal realism enabled Indian artists to quickly adapt to the scientific precision demanded by their new patrons-including members of the British East India Company and private collectors such as Lady Impey, wife of the Chief Justice of Bengal. The artist delineated each barb of the feather with care and patiently applied layers of color and burnished the surface to give the plumage a brilliant luster.

Lady Mary Impey came to Calcutta with her husband, who served as Chief Justice of the Supreme Court at Fort William, and she became known as one of several amateur natural historians in India. She was intensely interested in identifying and recording species unknown to Europe and kept a private zoo, from which this green-winged macawânot Indian but native to the tropics of the New Worldâmust have been painted.

To record the species she encountered that were exotic to western eyes, Lady Impey employed a stable of painters. Shaikh Zayn al-Din, the Muslim painter of this macaw, was one of her leading artists, employed from 1777 to 1782; Ram Das and Bhawani Das, both Hindus, were two of Impeyâs other regular painters. All three came from Patna, part of the provincial Mughal court of Murshidabad, and were trained in the Mughal style of painting.

Lady Impey often insisted on pairing fauna with flora in a single image. In this painting, the green macaw (Ara chloroptera) rests on the branch of a Nagarsu tree, identified in the Persian inscription as darakht-i nagarsu. In its beak, the macaw holds a nut and appears poised to crack it.
Last Updated: 5/22/2018