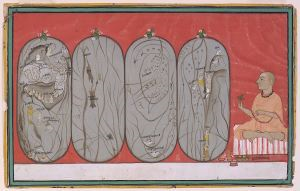 A Pilgrimage of the Mind

Power & Desire, 04/00
This painting shows another manifestation of a celestial vision. The four oblongs in shown here are bana-lingas â stones rubbed smooth by a river, which are worshipped as abstract icons of Shiva. A devotee sits in prayer, anointing the lingas with holy water and crowning each with sacred bilva leaves.
Water streams down the sides of the lingas. The inscriptions indicate that each linga symbolizes a sacred body of water. The first, with an image of the infant Krishna, is the river Jumna. The second is Gomukha, the cow-face-shaped cave in the Himalayas from which the holy Ganga originates. The third is the place where the Ganga flows into the ocean. And the fourth is the Goddess Ganga herself, who fell from the heavens into Shivaâs hair, and after years of wandering through his dreadlocks, trickled gently to earth.
In India, the pilgrimâs goal is a water body â a sacred tank, lake, river source, or point of confluence. Here, the devotee makes a virtual pilgrimage to the Jumna and the Ganga, mentally superimposing them on the lingas. But the lingas are also in his mind: the oblongs float, without support â yet are crowned with ârealâ bilva leaves.

October 2005
Domains of Wonder
When sages meditate, they undertake mystical journeys of the mind. Here, the sage's holy thoughts turn to the source of the sacred Ganges river in the hair of the god Shiva in the Himalayas, to the incarnations of Vishnu, and to other subjects not readily comprehensible. Each lobe of his thoughts is honored with flowering sprigs of a sacred plant.
Last Updated: 9/5/2017