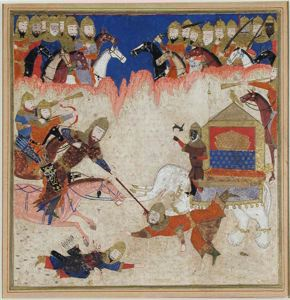 December 2007
Asian Court Rotation
This page depicts the fight between a heroic warrior Rustam and the Khaqan (or âLeaderâ) of China. The artist presents the contrast between the brave warrior on his horse, and the Khaqan with his elaborate defenses, an elephant and a howdah. Rustam is shown using his lasso with great dexterity to remove the hapless Khaqan from his howdah and bring him unceremoniously to the ground.
It was during the 15th century that Muslim Sultanate rulers in India commissioned manuscripts painted in the Persian style. They admired the culture of elite Persian society, and emulated them by studying and commissioning illustrated copies of classic literature, such as the Shahnameh.

In this episode from the epic poem the Shahnama, the hero Rustam, on the dappled horse on the left side of the painting, must defeat three kings in a single battle. Here we see Rustam lassoing the Khaqan (âleaderâ) of China and dragging him from his elephant. The story is in the Persian language, and the book was written on paper, representing major changes from earlier forms of book production in India.

Shahnama
An epic poem recounting the history of Iran from the creation of the world to the mid-seventh century CE. The story has sections corresponding to the principal dynasties of Iranian history: the mythical Pishdadians and Kayanians, as well as the historical Parthians (mid-3rd century BCâ220s CE) and the Sasanians (224â651 CE). The text is subdivided into the reigns of fifty kings, and tells the exploits of heroes like the brave Rustam and villains such as the evil Zakhak. The text became popular across the Persian-speaking world, which during this period included South Asia.
Last Updated: 9/5/2017