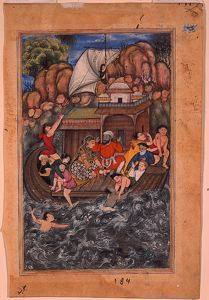 A Storm at Sea


A STORM ARISES ON THE SEA WHEN KHURSHID IS DECEITFULLY SOLD INTO SLAVERY (TUTINAMA)
Attributed to Basawan
Opaque watercolor and gold on paper, ca. 1560
Edwin Binney 3rd Collection
1990:143

MANUSCRIPT
This leaf comes from a collection of chain stories, like the Arabian Nights, known as the Tutinama or âTales of a Parrot.â The parrot told a story each night to a lady to catch her attention and deter her from liaisons with other men while her husband was away. The manuscript was another of the fables commissioned by Akbar early in his reign. The story was originally a collection in Sanskrit, but had been adopted by the Persianate world, translated into the Persian language, and the original characters given Persian names. The stories were thus known by both the new Mughal rulers and their Indian subjects.

SUBJECT
This story tells of the beautiful but ill-fated Khurshid who was on a pilgrimage to Mecca when she was captured and sold as a slave to a sea-going merchant. A storm comes up at sea, and as his sailors struggle to pull the drowning crew back on board and control the wind-whipped sail, the merchant realizes it is an omen: he should not have bought the girl.

STYLE
The painting is ascribed to Basawan, a Hindu working at Akbarâs court. Working outside traditional Persian and Indian painting styles, Basawan was interested in representing believable three-dimensional space. His hand is evidenced by the sail filled with air, and the attempt at a plausible space on the deck of the boat. Note the European depicted on board the troubled boat, recognizable by his golden curls.

The Jackal who Pronounced Himself King

1990.273
Portfolio List Click a portfolio name to view all the objects in that portfolio
This object is a member of the following portfolios:

Your current search criteria is: Portfolio is " Painting" and [Object]Display Artist is "Basawan".