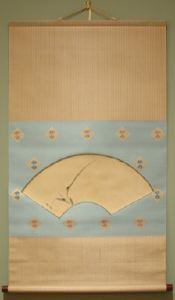 Asia Crossroads installation
October 2003
Shibata Zeshin was born into a family of lacquerers who served Japanâs Togugawa shogunate (1615-1868)âa regime that closed Japan to outside contact in 1639. By the time of Zeshinâs death in 1891, a great deal had changed, and Japanese art was inspiring new aesthetic directions for artists in Europe and America. Commodore Perry had arrived in 1853, ending Japanâs isolation; the shogunate had collapsed in the 2nd quarter of the 19th century; and the imperial family had been restored to rule in Japan in 1868. In his later years, Zeshin became an internationally known artist and represented his country in the promotion of Japanese lacquer art at the International Expositions of Vienna (1873), Philadelphia (1876), and Paris (1890).

This painting, closely related to designs that Zeshin also realized in lacquer, conforms to the style of lyric naturalism that he learned as a student of the Shijo school of painting in Kyoto, and to which he brought compositional daring and sparkling wit. Here he has introduced the vibrant luster of black lacquer into an ink painting, rendering the hard bodies of the insects in virtually three dimensions amid the wafting grasses.
Last Updated: 1/13/2020

Your current search criteria is: Portfolio is " Painting" and [Object]Display Artist is "Shibata Zeshin".