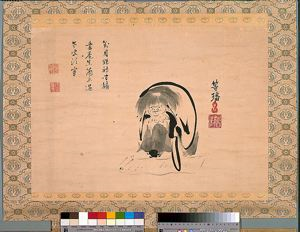 ASIA CROSSROADS, 08/01
The painting is inscribed with a poem by Gyokusai Gitan:
He left a broom behind and cried out abuses to the sky;
Truly one deserted a fine child.
Once, only one stroke, truly.
Jittoku's name literally means "Picked up", and refers to Jittoku's rescue by a monk who found the orphaned child crying and brought him back to the monastery. He was allowed to grow up in the monastery's ktichen and do odd jobs. Jittoku and Kanzan shared bits of food brought by Jittoku from the kitchen. together, the two muttered and laughed over the human predicament.

June 2005
Tastes in Asian Art Installation
This Japanese painting depicts the famous Zen Buddhist monk Jittoku leaving his broom behind and gazing upward into the sky. The painting is one of a pair; its counterpart portrays another Zen monk Kanzan. Kanzan and Jittoku-figures whose legends originally derived from two eccentric poet-recluses from Tang China-were considered in Japan to be Zen masters who had attained the secret of Zen: simplicity and freedom from all the constraints of ritual, doctrine, and logic. Appearing as simple-minded rustics with complete disregard for conventions, Kanzan and Jittoku have been a favorite subject of Japanese painters since the 15th century. The representations of these two holy grotesques always strive to portray them with as few brushstrokes as possible. As shown in this example, a few quick, sure, and ink-loaded brushstrokes suffice for the whole, giving the spontaneity prized in Zen aesthetics.
The signature and seals on the picture identify the artist as Unkoku Tohan (1635-1724), an artist of the Unkoku school that followed the style of the renowned 15th-century monk-painter Sesshu. However, the paper used in the painting is washed with a thin layer of mud; mud paper was commonly used in the 19th century, indicating that the painting may be a later copy.
Last Updated: 8/20/2012

Your current search criteria is: Portfolio is " Painting" and [Object]Display Artist is "Unkoku Tohan".