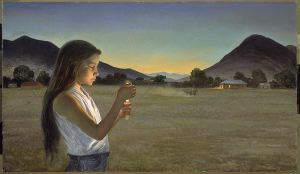 AMERICAN INSTALLATION
October 2004
The Southwest was a primary force in Peter Hurd's art. Born in New Mexico, he spent much of his adult life there. The Eve of Saint John depicts his preferred subject, the people and landscape around him. The girl featured in the painting is Dorothy Herrera, the twelve-year old daughter of Hurd's retired ranch foreman. She carries a candle to light her way to a church festival. Dorothy, set against the bleak background of a New Mexico landscape, evokes the isolation and loneliness of adolescence and the importance of ritual occasions in enlivening daily life in rural America. The painting is painted in tempera, an Old Master medium that Hurd made his own. Look closely at the painting's surface to see how Hurd builds up small brushstrokes to create a tightly illustrative image.
Last Updated: 7/29/2021

Your current search criteria is: Portfolio is " Painting" and [Object]Period/Reign is "Modern and Contemporary".