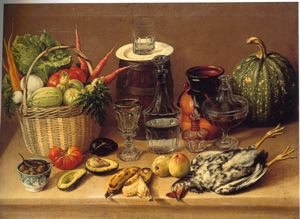 JosÃ© AgustÃ­n Arrieta was trained at the Academy in Puebla, Mexico at a time when many academic painters in the country favored dramatic historical narratives and sweeping landscapes. Arrietaâs work, however, follows the nineteenth century costumbrista tradition, an artistic practice developed by foreign artists that placed an emphasis on traditional and regional material culture. Arrieta took ownership of this tradition and made it his own, creating incisive images that portrayed both the people and the products of their own country. In this work, Arrieta portrays chilies, avocados, and plantains, all foods associated with Mexico. Like many of Arrietaâs still lifes, this work demonstrates his extraordinary attention to detail and evokes the domestic world of the emerging middle classes in Mexico in the second half of the 19th century.
Last Updated: 9/15/2021

Your current search criteria is: Portfolio is " Painting" and [Object]Period/Reign is "Modern and Contemporary".