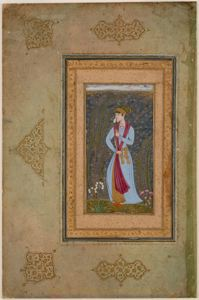 A slim youth walks dreamily in a field of flowers. He
gently strokes his cheek with a bunch of narcissus, and has another spray tucked into his collar for lingering pleasure.

Made by an Ã©migrÃ© artist from Persia, this painting has an attenuated Persian manner, quite different from the
luscious style developed by this time in the court of Jahangir. Its theme is common in Persian poetry and painting, where delicate youths are described as the reflection of the beauty of heaven on earth. The painting was probably accompanied by a verse now lost.