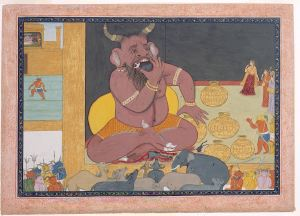 The Demon Kumbhakarna finally wakes up and eats

The giant monster Kumbhkaran was the brother of the many-headed demon king Ravana who abducted Sita early on in the Ramayana. Kumbhkaran slept for six months and ate for six months, his diet consisting of large animals. Here we see him gobbling down an elephant in Sita's presence, while Ravana holds forth in a distant room at the upper left.

Power & desire, 04/00
The demon king Ravana has abducted Sita from her forest hermitage. âHe-of-the-ten-heads-and-hundred-armsâ can be glimpsed in the faraway chamber at the top left corner of the picture.
Closer to us is his monstrous giant brother Kumbhkaran, who sleeps for six months and then wakes for a day. Today the army of Rama is at the palace gates, and Ravana has had Kumbhkaran roused. Before he can fight, he must eat. His meal starts with two thousand jars of wine, followed by the herd of animals gathered at his feet. He has just stuffed a whole elephant into his mouth, and the blood is trickling down his belly and pooling at his feet.
Kumbhkaranâs readiness will be conveyed to Ravana by the orange-bodied demon who observes the giantâs progress at the right of the picture, and toddles toward Ravana in the upper left.

May 2006
Wit and Wisdom
Kumbhakarna, a powerful giant with an insatiable appetite, is the brother of Ravana, the antagonist of the Hindu epic Ramayana who abducted Rama's wife Sita. The ten-headed Ravana has summoned his minions to prepare mounds of fresh meat in hopes that the scent of food and wine will rouse his sibling from the curse of deep slumber to aid him in battle against Rama. This scene captures the moment when the hungry giant, finally awakened, devours the animals offered to him, as a terrified Sita watches this monstrous feast from the corner.
May 18, 1985
I have always been a push-over for an ugly figureâ¦.and this one is monumental. Perhaps it all goes back to Monif's miniatures which showed bloody battles, which were cheaper than other leaves from the same series. But this demon is SPECIAL.
A fun addition.

Rama allowed Ravana to return to his palace to rest after he seemed exhausted from battle. Dejected, Ravana realized he needed the help of his brother Kumbhakarna, a colossally sized demon, unmatched in power. Kumbhakarna had been cursed to sleep for six months at a time, and whenever he awakens, he is ravenous.

Kumbhakarna had fallen asleep only nine days ago. Ravana ordered that he be awakened. After great effort, the demons finally got a thousand elephants to trample Kumbhakarna. A feast of fresh animals had been assembled for him, and having devoured them, Kumbhakarna was ready to fight on his brotherâs behalf. His size and power terrified the monkey army, but after protracted fighting, Rama was finally able to sever his limbs, and, at last, his head.

In one of the most captivating renditions of the scene, the live animals look on with anxiety or fury at their impending fate.
Last Updated: 9/5/2017