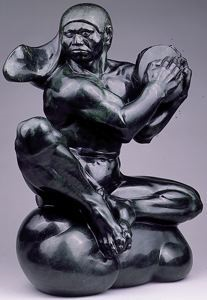 Sculpture, Fine Arts Gallery, San Diego, 1977.
Carving simple, compact forms from hard stone or rosewood, Hord idealized the peoples of the southwest and Mexico. A San Diego resident, he is much admired locally for his fountains. "Guardian of the Waters" at the County Administration Building and "Tehuantepec Woman" in the courtyard of the House of Hospitality in Balboa Park. "Thunder", an Indian sitting on a cloud beating his native drum, was carved from a large block of jade weighing 460 punds and required two and a half years of carefull grindling and polishing.
Last Updated: 8/8/2013

Your current search criteria is: Portfolio is " Sculpture" and [Object]Country is "United States" and [Object]Century is "20th century".