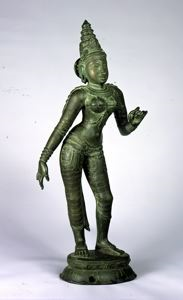 04/14/2017 Diana Chou
The goddess Shri Devi is the consort of Vishnu, and is the personification of prosperity, abundance, and good fortune. She is depicted in the form of an idealized young mother whose breasts are bound with the distinctive band typical of South India. Originally she would have formed part of a group of sculptures with Vishnu at the center and the other consort, Bhu Devi, on the other side of Vishnu.
When this image was paraded on a chariot for festivals, a lotus flower would have been placed in her left hand, and earrings inserted in her ears.
Last Updated: 8/26/2022

Your current search criteria is: Portfolio is " Sculpture" and [Object]Display Artist is ".