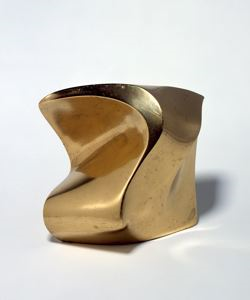 When Arp arrived in Paris in the 1920s from his native Alsace, he entered into the world of an avant-garde that was already steeped in the exploration of abstract form and thought. He had been a founding member of the Dada group and also had experimented with Surrealism and Constructivism. In Paris, he associated with the artists of the Cercle et CarrÃ© (including Pierre Daura) and later joined Art Concret and Abstraction-CrÃ©ation (where he met Jean HÃ©lion).

Arp worked in a variety of media including collage, printmaking, and painting. He first worked in sculptureâwhich he referred to as concretionsâin 1929. He began by using wood and stone and eventually turned to plaster and bronze. His sensual, rounded forms refer to those found in nature, ranging from seashells to the female figure.
Last Updated: 4/29/2014