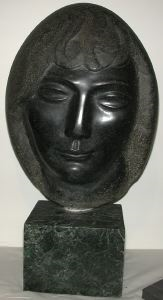 Head of a Virgin

Sculpture, Fine Arts Gallery, San Diego, 1977.
Themes of tenderness - animal in repose, mothers with children carved from natural boulders with some of the natural rough texture remaining are Zorach's favorite expressions. Strength and vitality come from the inherent qualities of the material, natural subject matter in traditional poses and simplification of form.

March 2003
American Installation
D. Scott Atkinson
As a youth William Zorach emigrated with his parents from Lithuania to Cleveland, Ohio. At the age of twenty, he began attending the Art Students League and the National Academy of Design in New York. Zorach then studied in Paris, where he met his future wife, the Californian Marguerite Thompson, who introduced him to Fauvism and Cubism. He explored these styles in painting until 1922, when he dedicated himself to sculpture.

Zorach abandoned the angularity of Cubism for smooth, round, volumetric forms based on the sculpture of ancient cultures. Although he produced sculpture in a wide range of media, including metals and hardwoods, he preferred working in stone.

Head of a Virgin, carved from a block of black granite, is part of a series of heads Zorach began producing in the early 1940s and continued to make over two decades. The simplified features of this sculpture are composed of a series of round geometric shapes. Head of a Virgin belongs compositionally to the figurative modernist tradition and owes more to a stylized simplification of form than to abstraction.
Last Updated: 8/8/2013

Your current search criteria is: Portfolio is " Sculpture" and [Object]Obj. Type is "Granite Sculpture".