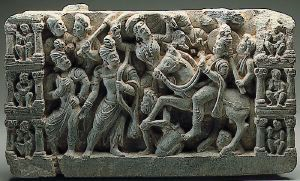 04/14/2017 Diana Chou
Siddhartha lives a happy, sheltered, life in the palace, but he desires more than the pleasures of a royal upbringing. This relief depicts a pivotal moment in his young lifeâSiddhartha has chosen to renounce his life as a prince in order to seek enlightenment. He rides in secret out of the palace, with the hooves of his horse carried aloft by earth divinities so that their clatter would not arouse the palace guards. He is shown with a halo, and gods carry a parasol and fly whisk over him in deference to his status as one who is about to become a spiritual king.

Your current search criteria is: Portfolio is " Sculpture" and [Object]Period/Reign is ".