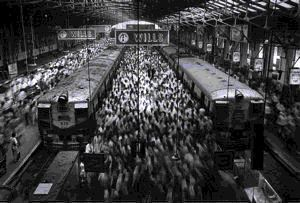 October 2007
Going Places: A Series on the Travels of Artists, Objects, and Tastes between Asia and the West
This photograph is part of a project entitled, Migrations, Salgadoâs work over a seven year period in 47 countries focusing on movements of displaced people in Africa, Asia, and Latin America. Through this series of powerful black-and-white photographs, Salgado wished to call attention to the effects of globalization and those people living in different regions of the world who are forced out of their homes as a result of war, repression, or poverty. Each photograph in the project is accompanied by Salgadoâs observations: âChurch gate is the terminus station of the Western Railroad Line, which brings 2.7 million commuters into Bombay [Mumbai] every day. It is not a large station, but at rush hour trains seem to arrive every twenty seconds. Built [under British rule] by the British, Indiaâs railroad system covers much of the country. But now, even with the addition of numerous commuter lines, such is population growth here that the trains are always dangerously overcrowded.â (From the book, Migrations, 2000) Overlooking the station, Salgado depicts the frenzy of the commutersâwhose movements appear like individually painted brushstrokes in this photographâexcept for a motionless figure with a suitcase at the lower left corner. Originally trained as an economist, Salgado began to take photographs at the age of 29. Like Henri Cartier-Bresson, he also uses the small, portable Leica camera, often with 28mm, 35mm, 50mm, and 60mm lenses.
Last Updated: 6/14/2011

Your current search criteria is: Portfolio is " Photography" and [Object]Period/Reign is "Modern and Contemporary" and [Object]Country is ".