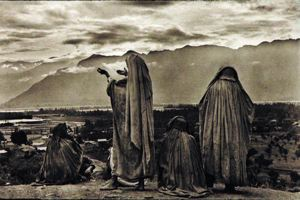 October 2007
Going Places: A Series on the Travels of Artists, Objects, and Tastes between Asia and the West
Cartier-Bresson was one of the four founders of Magnum, the prestigious photographic co-operative formed in 1947 in New York. He was especially drawn to Asia, no doubt as a result of his marriage to a Javanese dancer, Ratna Mohini. When the four founding photographers divided the world into quadrants, Cartier-Bresson chose to cover India, China, and Japan. In September 1947, one month after India declared independence from British colonial rule, Cartier-Bresson arrived in India with his constant companion, the 35mm Leica camera. The following year he traveled to Pakistan to document the consequences of Partition, when Hindus moved to India and Muslims moved to Pakistan. Capitalizing on the light weight and precision of the Leica and its potential for spontaneity, Cartier-Bresson seized many revealing moments with this small camera. Most famous for his 1948 photographs of Mahatma Gandhiâs funeral, Cartier-Bresson also recorded images of everyday people such as this photograph of Muslim women praying in the morning in the direction of Mecca. He preferred to spend time taking photographs rather than working in the darkroom. Cartier-Bresson sent his film back to Magnum (with bases in New York and Paris), where it was processed by his personally-trained technicians and printers to produce photographs with a subtle and sophisticated variety of tonal gradations from white through a range of grays to black for which he is known.
Last Updated: 3/16/2015

Your current search criteria is: Portfolio is " Photography" and [Object]Period/Reign is "Modern and Contemporary" and [Object]Obj. Type is "Photograph".