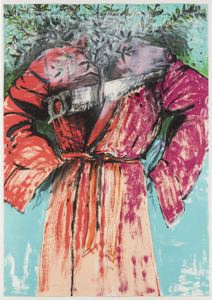 October 18, 2014
Anita Feldman, Deputy Director Collections & Exhibitions
Jim Dine
American â¢ 1935â
Atheism
Lithograph â¢ 1986
Dine, a native of Ohio, moved to New York in 1959 where he became immersed in the avant-garde art scene of Happenings and Pop Art. His work spans a broad range of media including painting, sculpture, printmaking, illustration and performance. Part of his method involves using common objects as iconic elements and restating the same themes in a variety of media. The common bathrobe, derived from newspaper advertise- ments, became a self-referential element in many of his works from as early 1964. In Atheism, with its image of a saw cutting the tree which emerges from the robe, the artist is flirting with surrealism while making a profoundly subjective statement.
Museum purchase 1992.2
Last Updated: 8/5/2021