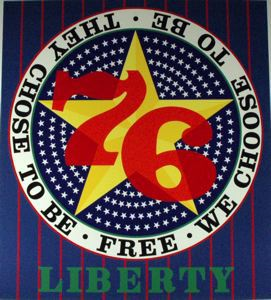 October 18, 2914
Anita Feldman, Deputy Director of Collections and Exhibitons
Robert Indiana
American â¢ 1928â
Liberty â76
Screenprint â¢ 1974â1975
Born Robert Earl Clark in New Castle, Indiana, the artist changed his name to Robert Indiana in 1958 several years after settling in New York. Having studied at the Art Institute of Chicago and the Edinburgh College of Art, Indianaâs early work was influenced by the vibrating color of Ellsworth Kelly (1923â ) and the use of stenciled words and numbers by Jasper Johns (1930â ). Indiana became one of the key figures in the American Pop movement through his fusion of simple forms inspired by roadside signs and popular culture with bold color. In 1976 he was commissioned by the tobacco company Lorillard to create the serigraph Liberty â76 for inclu- sion in a portfolio celebrating the American Bicentennial. Indiana was also greatly inspired by Marsden Hartleyâs use of symbols and flat bright colors to create portraits, and created his own series of self-portraits in this style at the same time as this work.
Gift of Lorillard, a Division of Loews Theatres, Inc.
1976.191
Last Updated: 10/20/2014