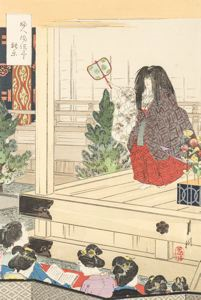 Noh drama was the favored entertainment of the aristocratic court and upper class in Japanese society. Ogataâs print demonstrates a typical Noh setting, with the main actor dressed in a traditional costume complete with mask and wig. The well-educated audience is expected to already know the story, legend, and characters being displayed on the stage, forcing the actor to portray the essence of the story rather than the plot. With its roots in Buddhist philosophy, Noh aims to incorporate the principles of austerity, understatement, and restraint in its dance and storytelling. Several musicians on the side of the stage provide a rhythmic sound while a chorus accompanies the actorâs stylized movements with an explanation of the events occurring on stage.
The use of shading, naturalistic perspective, and vivid coloration are characteristics that artists of the Meiji period (1868â19012) incorporated from their increased exposure to Western art.
Last Updated: 1/8/2016

Your current search criteria is: Portfolio is " Prints and Drawings" and [Object]Period/Reign is "Modern and Contemporary" and [Object]Display Artist is "Ogata Gekko".