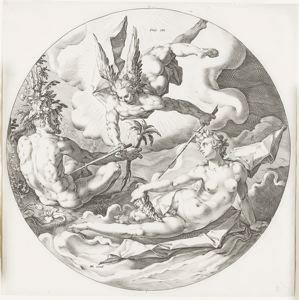 The Creation of Dry Land and the Seas

Jan Muller was the son of Harmen Muller, a successful Amsterdam printer, engraver, and publisher, but he seems to have studied with Goltzius and made many prints after Goltziusâs designs. This example comes from a series of prints depicting the creation story from the Book of Genesis and shows the third day of creation, when God separated land and sea and created plants. God twists through the sky, while Land is pictured as a man sitting cross-legged on the ground with vegetation growing out of his head, and Sea as a woman reclining with shells in her hair and hand. The swirling clouds and figures are set in a circular frame that mimics the shape of the world. Treating a biblical story in an artistic language usually reserved for secular subjects, the composition is an entirely original take on the Genesis story.


Jan Muller
Netherlandishâ¢ 1571â1628
The Creation
of Dry Land and the Seas
(after Hendrick Goltzius)
Engraving â¢ ca. 1589
And God said, âLet the waters under the heaven be gathered
together unto one place, and let the dry land appear.â
âGenesis 1:9
Influenced by the Catholic Counter-Reformation, many
series of prints to come out of Goltziusâs workshop
portrayed Biblical narratives. The Creation of the World
series consisted of images representing each day of the
creation, including Day Three, illustrated here by allegorical
figures of the sort found in his mythological images.
Gift of Norman Leitman and Todd Butler, 2004.164
Last Updated: 5/13/2015

Your current search criteria is: Portfolio is " Prints and Drawings".