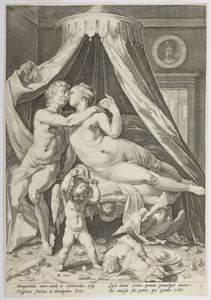 Jacob Matham was the stepson and favored pupil of Hendrick Goltzius. He engraved over 400 prints, over a quarter of which are after designs by Goltzius himself. When Goltzius began to move away from printmaking to concentrate on painting in the years after 1605, Matham took over the familyâs printmaking business. These engravings, however, date from early in Mathamâs career and are two examples from a series of four that depicts the Loves of the Gods. In one, Jupiter, in the form of a bull, comes to carry off the princess Europa; in the other, we see Venus and Mars, the Goddess of Love and the God of War, while in the foreground their child Cupid plays with Marsâs discarded armor. Combining traditional mythology with playful eroticism, the loves of the gods were a continually popular subject for artists of the Renaissance and Baroque eras.

Jacob Matham
Netherlandishâ¢ 1571â1631
Mars and Venus
(after Hendrick Goltzius)
Engraving â¢ ca. 1590
The illicit affair between Venus and the war god Mars
was conveyed to her husband, the Olympian blacksmith,
Vulcan, by all-seeing sun god Apollo. Vulcan crafted a net
of very fine bronze mesh to entrap the lovers in bed and
opened the doors to reveal them to the rest of the gods,
thereby humiliating Mars and Venus.
Gift of Norman Leitman and Todd Butler, 2004.143
Last Updated: 5/12/2015

Your current search criteria is: Portfolio is " Prints and Drawings".