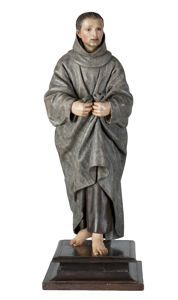 Pedro de Mena was the greatest Spanish sculptor of the later seventeenth century, and like most Spanish sculptors, generally worked in carved and realistically painted wood. This work depicts San Diego (also known in English as Saint Didacus), the fifteenth-century Franciscan friar for whom this city is named. Diego was dedicated to the poor and stole bread from his monastery to give to the needy. On one occasion, the superior at the monastery caught Diego in the act and demanded to know what the friar was carrying in his robes. As Diego looked down, however, the bread transformed into flowers, a miraculous confirmation of his saintly charity. As was usual for sculptures of the saint, the bread and flowers were not carved in wood, for the faithful would place real or silk flowers in the lap of the sculpture.
It has been said that Mena was unsurpassed both in the technical skill of his carving and in his ability to capture religious feeling. Both talents are fully evident here, especially in the expression on the saintâs face, which simultaneously captures his guilt in being caught stealing and his awe at the miracle that then occurred.
Last Updated: 6/14/2013

Your current search criteria is: Portfolio is " European Art before 1900" and [Object]Display Artist is "Pedro de Mena".