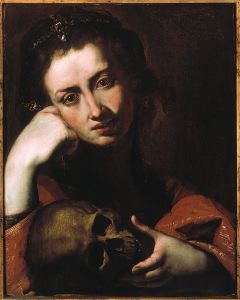 A popular subject due to her combination of physical beauty with spiritual devotion, Mary Magdalene has given up her worldly possessions in order to follow a life of piety. Like the image of Saint Francis nearby, she looks directly at the viewer, inspiring contemplation. The skull is a reminder of lifeâs fleeting nature.
Procaccini was born in Bologna and spent the majority of his career in Milan and Genoa, which were then under Spanish rule. He worked for a series of important patrons, including Spanish governors and archbishops of Milan, such as Cardinal Federico Borromeo.