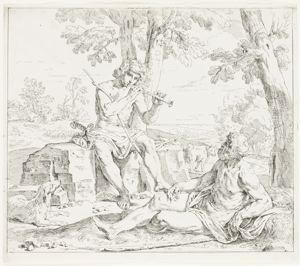 Simone Cantarini
Italianâ¢ 1612â1648
Mercury and Argus
Etching on wove paper â¢ 1642â1645
The story of Mercury and Argus begins with Jupiterâs illicit
desire for the nymph Io, which sent Juno into a jealous
rage. Coming to Io cloaked in black clouds, Jupiter transformed
her into a beautiful white cow to save her from
Junoâs vengeance. Juno was not deceived and took the
cow captive, placing her under the watch of many-eyed
Argus. When Jupiter could no longer bear Ioâs absence, he
sent his son Mercury to dispatch Argus. Disguised as a
shepherd, the messenger god lulled Argus to sleep with
song, and then killed him. Upon learning of his death, Juno
took Argusâs one hundred eyes and attached them to the
tail of her peacock.
Museum Purchase, 1993.5
Last Updated: 5/13/2015