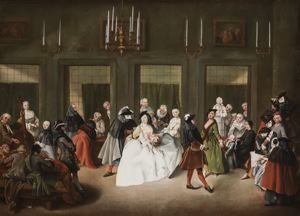 The interior scenes of 18th-century Venetian life painted by Pietro Longhi (1700/02â1785) were inspired by Dutch genre paintings of the previous century, and they are a counterpart to the cityscapes of Canaletto. Longhiâs work was intensely popular, and his large studio often replicated his compositions. Giuseppe de Gobbis was his primary assistant, and he seems to have been responsible for these canvases, which replicate Longhiâs work, and which exist in at least four other versions. The Convent Parlor depicts the visiting room at the convent of San Zaccaria. Convents were by this time filled with the younger daughters of the Venetian aristocracy and accordingly had the organized visits seen here. The focus of the scene, however, is but, rather, the amorous encounter between the masked visitors, not the girls behind the convent grating. The companion canvas shows a ridotto, a sort of gaming establishment where all layers of society engaged in discussion, gambling, conspiracy, or simple flirtation. Most visitors wore masks, which made recognition virtually impossible. A principal attraction for the many foreign visitors to the city, the ridotti were by 1768 so infamous that the Doge of Venice ordered them closed.
Last Updated: 2/15/2018