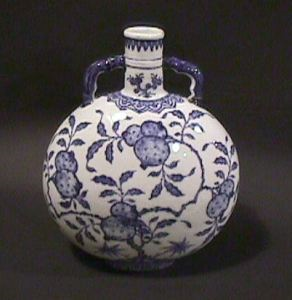 June 2007
Lyric Visions
During the 15th and 16th centuries in particular, possession of Chinese blue-and-white porcelains was an indicator of high social status and wealth in Persia, India, other parts of Asia, and Europe. International trade in ceramics stimulated their production in China during the Ming (1368â1644) and Qing (1644â1911) dynasties. The tree laden with pomegranates was an especially popular motif in Persia and Central Asia, where the fruit, by virtue of its many seeds, symbolizes auspiciousness and the blessing of numerous progeny. The shape of this flask is remarkably similar to the one being used as a flower vase in the 15th-century Persian painting Nushabeh presents Eskandar with his portrait (1971:58) on view in this gallery.
Last Updated: 6/12/2012

Your current search criteria is: Portfolio is " East Asia" and [Object]Century is "18th century".